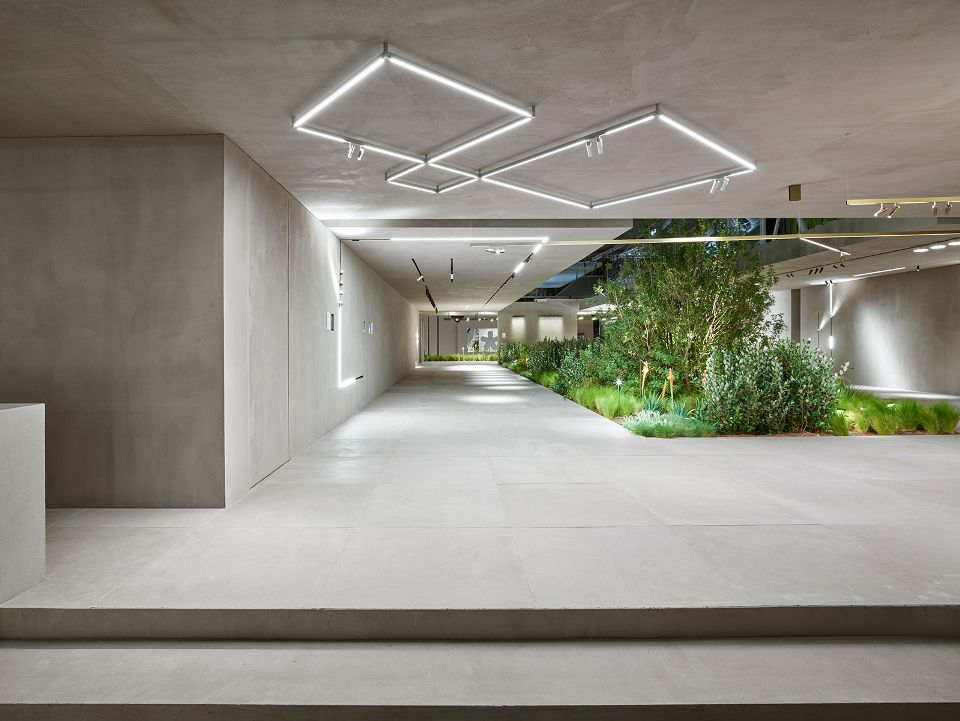 Piero Lissoni is an internationally renowned and award-winning architect and designer from Italy. During Light + Building 2018, LICHT editor Andrea Mende was given the opportunity to meet him for an interview at the Flos stand. He has already designed several luminaires for the Italian manufacturer.

The Flos stand at the lighting fair 2018 in Frankfurt occupied more than 700 square metres, designed by the Belgian architect Vincent Van Duysen. Among the novelties on show were several products by Piero Lissoni, including the »Diversion« lighting system, the »Atom« luminaire as an extension to the »Zero Track« and the »Landlord« outdoor luminaire.

Piero Lissoni’s lighting design initially appears minimalist and linear and is characterized by geometric forms. »Diversion« consists of suspended light strip modules. These LED elements can be interrupted to integrate spotlights, for example. Foldable connectors make the system extremely flexible (picture above). For the »Zero Track« surface-mounted track (Design Flos Architectural), he designed »Atom« – a round or rectangular luminaire that sets a strong accent in form and dimension. For outdoor use, he designed »Landlord«, equipped with a spotlight or a round diffuser.

But behind this reduced formal language is a lot of detailed work and the claim to create a product with a high aesthetic lighting effect. But what significance does the question of functionality have in this context? „I am not a lighting designer. I don’t think about functionality. At every moment we discover new technologies, for example the solutions with LEDs were initially rather unattractive,“ explains Piero Lissoni. „We work together as a team, and many engineers are part of it. There is always a discussion: everything is possible, nothing is possible. This is not just about the technology of light. It’s about creating a product with a sophisticated impression.“

»Atom« appears as a round luminaire or spotlight and is matched to the 15 mm slim „Zero Track“ surface-mounted track (Design Flos Architectural).

As an architect, Piero Lissoni plans and thinks in large dimensions, as a designer of luminaires he deals with much smaller structures. What is the attraction here? »It is in our nature to change scale. It’s always about proportion, finding the right balance,« he says. And that can be transferred to the interior and the exterior. Bringing artificial light into a natural environment requires sensitivity. Light should convey security, provide orientation and create a pleasant atmosphere. »I like old houses with small windows and the special atmosphere that prevails in them. I like the poetic thought behind it. I also like candles and natural light. But sometimes it needs a more precise solution«, the architect describes it. Which light in nature inspires Piero Lissoni the most? »It’s a phenomenon when fireflies fly in may and june. It brings back beautiful memories of my childhood.«

»Landlord Soft« is equipped with a movable diffuser so that the direction of light can be adjusted as required.

Wall lamp »Camouflage« adapts perfectly to the surface – or deliberately stands out from it. Made of teak wood, basalt stone, marble or rust optics.