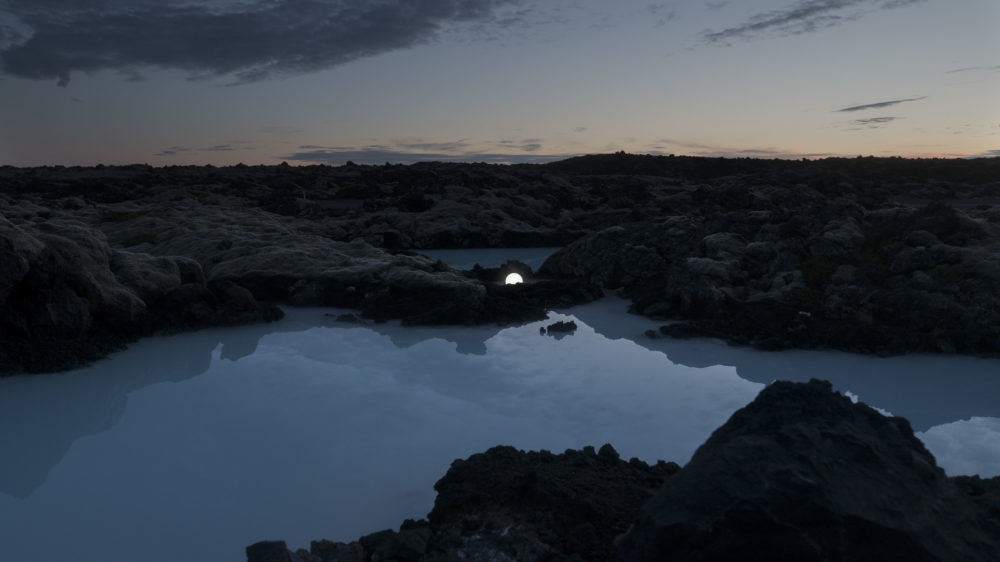 A CINEMATIC EXCURSION TO LIGHT

The artist duo 3hund from Saarbrücken travelled with dragons, drones and a handful of electroluminescent lamps to the most remote corners of Iceland. In this abandonment, a video was created in which the medium of light takes on the role of the magical protagonist.

Untouched, vast landscapes. Moss green mountains and networked river veins. These scenes convey a feeling of endless silence. Only a mechanical, electronic sound accompanies the flight over gentle hills, rugged rock formations and lonely waters. Scenes of perfect beauty appear before the viewer, a magical cosmos in night blue and lava black that makes time and space forget for a moment.

Out of nowhere, light objects suddenly emerge. In glistening, misty white, fiery red or ice blue they break through the deserted setting without destroying the setting from palpably approaching darkness. Sharply drawn lines of light travel like a laser through rocks, triangles float through the air or stand on their tip, as if impaled. Balls glow under water, similar to a deep-sea creature that glows with its own energy. They all follow a clear geometry that opposes this nature in the greatest possible contrast.

Tarek Mawad and Friedrich van Schoor joined forces to form the artist collective »3hund«. They are the creators of the video »Lucid«, which impresses with its quiet and at the same time powerful images. The two light artists do not want to restrict their work to any particular technique; they use a wide variety of media. The attraction of setting up their installations in nature lies for both of them in the uncontrollable, to deal with the unforeseen and to capture the special atmosphere in fog or darkness. The idea behind »Lucid« was to create a surreal world of simple, geometric light objects that on the one hand seemed out of place and at the same time harmoniously integrated into the existing environment. On Iceland, partly also in Austria, they went in search of undisturbed places beyond any civilization.

The making of video shows the equipment used by the artists and reveals the sometimes surprising implementation. Nothing was animated for the film on the computer in 3D, but everything was produced in reality. The viewer follows Tarek and Friedrich on their way from one location to another, because in »Lucid« each location shown corresponds to an individual light installation. They used electroluminescent (EL) materials as light sources: EL foil, EL cables and EL tapes. To emit light, the fluorescent light pigments contained in it are brought under alternating voltage. For the operation of such installations 3hund used inverters, which run on battery or an external power supply. EL lamps are considered as cold light, they emit hardly any heat. EL cables or cords provide an even 360° light, they are also flexible, insensitive and can be designed in any length. The emitted short-wave light is also clearly visible from a distance, which is clearly illustrated by the pictures of »Lucid«. This equipment allows to generate a selection of colours and different shapes: with the help of a kite 3hund for example made light globes fly. Drones took the scenes from the air, which the artist duo put together so fluently that a six-minute, fascinating film was made. The accompanying music was provided by Achim »Künstler« Treu (aka UFO Hawaii) from Berlin.

Video and making of on www.3hund.com